Al-Akkad .. the First Palestinian who has Donated Millions to his Country 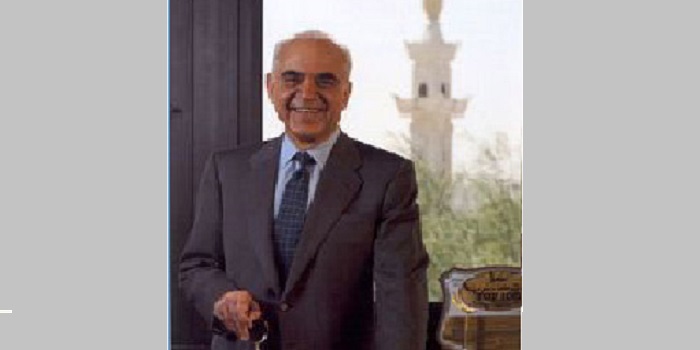 Omar El Akkad was born in Gaza City in 1927, supervised and managed several international financial institutions in the Middle East, including Saudi British Bank, Saudi Bank, and the Arab Investment Company in Luxembourg and Switzerland, and chaired Akkad Group, which was founded in Saudi Arabia in 1975.

In 1995,  the president of the Palestinian Authority Yasser Arafat asked the Akkad group to improve phone services in the West Bank and Gaza Strip. Thus, and in the same year, al Akkad announced the formation of the Palestinian Arab Investment Company to encourage investment and create jobs in Palestine. He also participated in several charity projects including his contribution to the establishment of the Faculty of Engineering at Birzeit University that carried his name.

Al-Akkad owns many companies in Saudi Arabia and other countries, including El Akkad Investment Company, which is a Saudi diversified holding company. Al- Akkad founded the company in 1975 for three basic goals in mind: to play an active role in the development of industrialization in Saudi Arabia, the development of human energy, and then through the pursuit of these two objectives generate profits and an appropriate expansion appropriately.

This was at a time when Saudi Arabia was testing an unprecedented expansion in the industrial and service sectors and therefore, opportunities and new horizons were provided.

Thus, Aiko used its sources to invest in companies in the manufacturing, distribution, services and consumer products sectors.  Aiko’s own investment portfolio was adapted to the opportunities that it could benefit from the most. Aiko's intention was to make each company it invests in one of the leading companies in its field

He also owns the United Motor Company, which is the largest agent for Chrysler in the Middle East. The company is also the agent for Dodge and Jeep in Saudi Arabia, the Ltd Arab Company for tile, - (Artec), and Medi Serv company, which is a company that provides hospitals, doctors and specialized centers in Saudi Arabia with medical and laboratory equipment. That’s in addition to the civil company for advanced systems, which is an agent and a partner of Motorola in the Saudi market, (NASCO) in the field of computers, public communication Limited company (Bravo), Riyadh Pharma for medicine production, Sanad company for insurance, the Arab Palestinian Investment Limited Company (APEC), and a number of other companies in Palestine and other Arab countries.

Al-Akkad was the first Palestinian to donate millions to his country, where he donated to establish the -Omar El Akkad- engineering faculty in Birzeit University, and the building of the faculty that was established with his support in 1984 on an area of ​​12,500 square meters. The building contains engineering departments, workshops, laboratories, in addition to some colleges.

He also donated to establish the engineering workshop building, which the first floor of it was built in 1984, and the second floor in 1995 with a college area of 1,790 square meters, which includes the workshops of the Engineering faculty and the Department of Languages ​​and Translation.

"Yes, we can" campaign to support the governorate of Bethlehem
More News
Corporate News and Stock Exchange

MOA: Chicken Prices Reasonable for Both Producer and Consumer
More News
In the spotlight
Abu Shusheh: Women did not Fall Behind the Top Positions of their Own Free Will

Masrouji: Being a Woman is not a Hindrance but a Catalyst\r